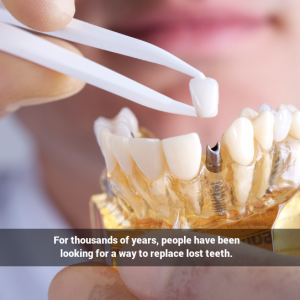 Today, dental implants are recognized as one of the best and most effective solutions for tooth loss and dental cosmetic issues. Modern implants are long-lasting, fully functional, and almost impossible to distinguish from natural teeth. But how long have dental implants been around? And how did they get their start?

It might surprise you to know that the Mayans actually made attempts at using dental implants over 1400 years ago. Archaeologists have found ancient skulls fitted with replacement teeth made of materials like jade and even seashells. Some of these were actually fused to the jawbone.

The advent of modern implants came about in the 1950s, when one surgeon noticed that a titanium cylinder he had placed in a bone to study the way a bone healed could not be removed. He coined the term “osseointegration” to describe the ability of bone to fuse with titanium. This discovery is the foundation of modern implant technology. Just like today’s implants, the first modern implants were secured to the jaw by titanium posts that integrate with the bone over time.

Implants were first offered for people who had lost all their teeth and couldn’t use dentures because they had lost so much bone mass in the jaw. First placed in 1965, early implants were made in just one width, but could come in various lengths. Implants were polished to mimic the shininess of natural teeth.

Since those early models in the middle of the century, scientific advancements have consistently improved upon early implants. Implants are now made in many shapes and sizes so that they match the function of the specific teeth they are replacing and so that they fit the recipient’s mouth perfectly. Also, the surfaces of dental implants are now roughened by sandblasting and acid etching, which has been shown to help these replacement teeth osseointegrate by increasing the surface area to which the bone can attach. Though there are now many different styles and sizes of titanium screws used to place implants in different patients, the titanium in these posts is still universally accepted as the strongest and longest-lasting material. In fact, the very first man to receive dental implants in 1965 died over forty years later with his original implants still intact!

Today, Boston dental implants have a success rate of about 98 percent. Their impressive history, effectiveness, and cosmetic appeal have made dental implants one of Boston’s most popular dental treatment options. Want to find out if you’re a candidate for implants in Boston? Schedule a consultation today with Dr. Guzman of Dental Partners of Boston.