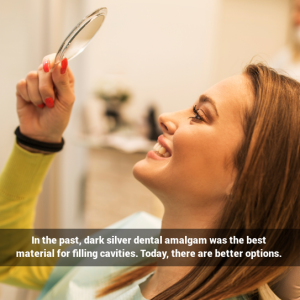 Once upon a time, almost everyone that needed a cavity filled got an amalgam filling—the common silver-colored kind of filling, which is made of a combination of silver, mercury, tin, copper, and other metals. Millions of people across the country now have amalgam fillings in their teeth, but in recent years, some have begun to wonder how safe it really is to have mercury in your teeth.

Besides the cosmetic improvement, composite fillings offer several advantages over amalgam fillings, such as the following.

If you’re concerned about the state or appearance of your existing fillings, schedule a consultation with Dental Partners of Boston, the practice that’s at the forefront of cosmetic dentistry in Boston. One of our experienced dentists will evaluate your situation and discuss the possibility of replacing your amalgam fillings.