A New Treatment for Receding Gums

June 5th, 2020 by Dental Partners of Boston | No Comments 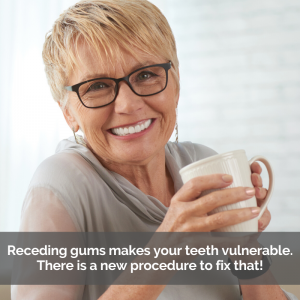 A woman holding a coffee mug smiles with bright white teeth. Caption: Receding gums makes your teeth vulnerable. There is a new procedure to fix that!

Receding gums is a condition where your gums pull back from the tooth surface. This causes the root surface of your teeth to be exposed. This form of gum disease is a serious consequence of poor oral health, which may lead to tooth loss.

Receding gums has a number of causes, including aggressive brushing over time, plaque buildup, smoking, hormonal changes in women, family history of gum disease, diabetes, and HIV. Certain medications can cause dry mouth, which increases your risk because your mouth has less saliva than it should. When you have a dry mouth, the tissues in your mouth can become vulnerable to bacterial infections and injuries.

Receding gums is something that is most common in adults 40 years of age and over. For this reason, people often think that it is a normal sign of aging and can go untreated.

Symptoms of receding gums include the following:

Receding gums will be diagnosed by a dentist who will give you an examination.

In the past, the only way to cover exposed dental roots was via gum grafting surgery. The procedure would stitch over the exposed root harvested gum tissue from other areas of the mouth. Traditional gum surgery was something that often created a lot of bleeding, and many patients found it uncomfortable. Today, however, the solution is far better with the pinhole surgical technique. During pinhole surgery, the periodontist makes a tiny incision above the affected tooth or teeth. Then tiny collagen strips are placed inside of the incision, holding the tissue in place and encouraging healing. This means it is far more comfortable for the patient and there is a reduced chance of infection. The incisions are so small that it means that patients also won’t have to live with scarred gum tissue.

What to Expect from Pinhole Surgical Technique?

Not only is it a far more comfortable procedure, but the pinhole surgical technique is faster. Dentists are able to treat several teeth at one time. Most patients will see the desired results in one or two pinhole surgical treatments. In the past, traditional gum surgery often required several sessions.

While some patients experience some bruising and swelling following pinhole surgery, the procedure does offer instant results. This means patients can enjoy full gum coverage immediately following the procedure, fending off dental sensitivity.

Who Qualifies for Pinhole Surgical Treatment?