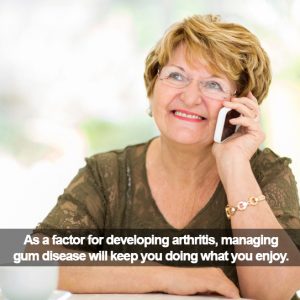 Though at first glance arthritis and gum disease would seem to be separate and unrelated health problems, they are commonly found together. A person who suffers from one is significantly more likely to also experience the other, a connection which has been repeatedly documented. While a causal link has not yet been proven between poor dental health and rheumatoid arthritis, the correlation between the two is well established, and the most recent research suggests that gum disease may be a precursor to joint pain.

Study of the connection between gum disease and arthritis goes back to at least 1987. A study, authored by Jerry A. Molitor, MD, PhD, began that year to examine the overlap which had already been observed between arthritis and periodontitis (gum disease). After eleven years examining the health of 6,616 participants, the researchers concluded that patients whose periodontitis was classed as moderate or severe were twice as likely to suffer from rheumatoid arthritis as those with little to no gum disease. That connection has been borne out since in multiple studies across several countries.

The reason for the connection was previously not understood. Initially doctors believed that the arthritis might be the cause of the tooth loss. Pain in the hands could easily make oral hygiene more difficult, and some of the medications used to treat arthritis can cause dry mouth, which promotes oral bacterial development. But more recent research suggests that gum disease may actually precede the development of arthritis. A study examining the effects of joint pain on oral hygiene concluded that pain due to arthritis was not enough to account for the link. And the correlation remained even among patients who were not medicated for their arthritis, meaning that dry mouth could not be the sole factor. The effects and treatment of the arthritis itself are not wholly responsible for the increased occurrence of gum disease in arthritic patients. Instead, similarities between the tissues of the gums and tissues of the joints–and similarities between the types of bacteria which can affect them–may provide clues about the source of joint inflammation and how it relates to dental health. Though the cause has not yet been firmly established, signs point to a possibility that gum disease contributes to arthritis.

If gum disease is a factor in the development of rheumatoid arthritis, then proper dental care becomes all the more important for those who have, or show other risk factors for, arthritis. Everyone should properly brush and floss their teeth, but if this is difficult or painful, talk to your dentist about what assistive devices might help you. Regular dental exams are also key to catching any infection early. Call our office or request an appointment online.